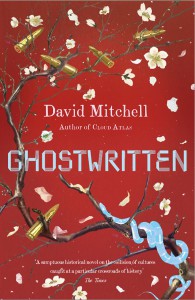 After the general amazingness of Cloud Atlas (the book and the film), I thought I'd give Mitchell's first novel, Ghostwritten, a try. Like Cloud Atlas, it follows the stories of several characters (nine, in this case) whose lives interlock and interact with each other. There are even a couple of old friends dropping into the action: Timothy Cavendish and Luisa Rey of Cloud Atlas both appear briefly, and a character with a comet birthmark.

I suppose my main problem with Ghostwritten is its very bitty nature. There were several characters I would have liked to know more of - Quasar the terrorist, Satoru the CD guy, Bat Segundo the radio host - and a few I could have done without - Margarita the art thief, mainly. There is some wonderful writing - "Jigsaw pieces of my dream lay dropped around" - and some great mystical quotes (not just some, actually: this novel is as much a quote machine as The Princess Bride or The Lord of the Rings). But the ending was perplexing, and left me cold. It didn't make me think, it didn't finish the story. It was...weak.

I loved, loved, loved Ghostwritten for about, oh, a third of the novel. Then I merely liked it. It tries to be too clever, too damn big, for its own good. I will probably read it again, because there's almost certainly stuff I've missed (it's that kind of book), but there are some serious flaws.