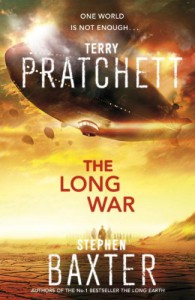 The Long War is the sequel to Pratchett and Baxter's earlier novel, The Long Earth, which asked the question: what if humanity suddenly had access to a billion Earths, all subtly different variations on the original?

I was kind of expecting The Long War to be a sort of hate letter to humanity, from the blurb, which mentions the trolls - those kind, singing humanoids we met in The Long Earth - being driven away by humanity's expansion.

But, surprisingly, The Long War is quite positive in that respect. There are enough non-idiots in Pratchett and Baxter's world for the Long Earth to retain its promise.

Twenty-five years after the events of The Long Earth, Joshua Valiente, pioneer and loner (although now married), is summoned by Lobsang, sentient computer and possibly reincarnated Tibetan, to find out what is happening to the trolls, and to try and change the hearts and minds of the politicians back on Datum Earth, the original Earth, towards the humanoids that populate the Long Earth.

There were some very specific things I disliked about The Long War. The dialogue is just terrible: wooden and clunky and overwrought. At some points it felt like the characters were talking past each other, like bad Shakespearean actors. And although the book sets up multiple engaging storylines that gain in complexity and overlap as it reaches its climax, all of this is suddenly stopped in its tracks:

The Long War was over.

What? I'm sorry, did I miss a whole war?

T.P. and S.B. may as well have written "And everything was magically better." It amounts to the same thing. There's no followup, no fallout, no real sacrifice. Just everything being somehow fixed in one line.

Having said that, I loved reading about the Long Earth, the ways humans had learned to deal with it, the economic and political realities of having a fifth of the population step away into infinity, the settlements, the transport networks, the cross-world communication. The Long Earth is one of those rare SF worlds that you actually want to exist, and that feel so real you're almost surprised by the thought that it isn't, and probably never will be. The Valhallan ending is heartwarming, and the, ahem, explosive Datum ending is too, as well as terrifying, even if you can see it coming a mile off.

I just really want the Long Earth to exist, OK?

So, yes, there are significant flaws here. But the concept, and the sheer narrative drive, are astonishing. I enjoyed this much more than I thought I would.